A downloadable game for Windows, macOS, Linux, and Android

You’ve been hired by the Hyperspace Delivery Service to make a delivery to planet Miridian V.

Located on the other side of explored space, the trip to Miridian V will be a dangerous yet lucrative journey full of mad robots and unpredictable stellar phenomenon.

Can you and your crew survive the trip? Will you die from the dreaded Telunian flu? Hyperspace Delivery Service offers an exciting and strategically challenging journey where you must manage your fuel, oxygen, food, and various other supplies to make your delivery within the target time.

Choose what kind of captain you will be. Work the trade routes, learn to use your crews’ unique attributes, mine for fuel, search for abandoned supplies, fight robot space pirates on the ground in retro FPS, experience thrilling space battles from the bridge of your space ship in retro 3D space shooting action.

Can you make it to Miridian V? See you on the next delivery!

Performance fixes. Full controller support!
Note, for the Android version that it will try to sign into google play but will fail since the app was not installed from google play. You can just ignore.

-Fix space controls getting glitchy where if using both mouse and keyboard to try and aim the ship at the same time.
-Fix intel being given despite not having enough credits.
-Fix local high score showing wrong number of days remaining
-Add crew and ship health status buttons during interactive events

-Fix game sending you back to ship if have no ammo but have a melee weapon (security).
-Fix blaster ammo not increasing if melee weapon is selected
-Fix bug if returning to ship with enemies still around, you can get damaged while the screen displays the loot you are taking back to the ship.

-Fix bug that could happen if you retreat at the same time as your ship is being destroyed.
-Fix getting reward in blockade mission if retreating.
-Fix FPS hacking sound possibly getting stuck on loop
-Adjust keyboard aiming to have weight (gradual steps)
-Fix food usage on easy mode
-Activate ship supply limits
-Clarify store limits vs ship supply limits
-Fix for allowing FPS missions if no ammo but security officer is alive

-Fix spelling mistake
-Add option to disable/enable vsync and frame rate lock. Set disabled by default now.
-Remove med bay button from space rip encounter. It was not supposed to be there.
-Add filter for objectionable words in name generator
-Fix for if you repair ship after a space mission, go on FPS mission, when you return to ship your ship health reverts to before the repair.
-Fix void space aliens attacking outside of void space.

-Fix radar in bridge view
-Limit max amount of intel can get
-FPS return to ship message shows key
-Fix death by sickness showing wrong sickness name
-Fix med kit name miss match
-Spelling fixes
-Legibility changes to map
-Remove medbay screen and combine with crew screen. Crew screen now has medkit buttons next to each crew member.
-Fix Mines being too far in blockade. Make blockade slightly easier
-Fix food use display on nav screen
-clear up pace screen (add help button)
-show ammo on FPS choice screen
-Fix bridge sprites not updating after player death in FPS rescue mission
-Escape (back) key now works to close various menus instead of always opening in game menu. Will open in game menu if not showing other menus.
-NEW control system. This means any previous customization's will be gone. I also reset the speed control for the ship to +,- instead of q,e. The reason for the change is to be able to support more controllers without issues.
-fix warp sound not obeying volume control
-Fix FPS enemy pushing player out of bounds
-Easy mode now harder
-Show damage to ship visually on bridge.
-New FPS framing. Show portraits of chosen crew with 3 levels of damage.
-Space combat will now always take place from the bridge view. This gives a better connection to the crew and what their doing while in combat. It makes it more obvious that your fighting from your ship and not in a shuttle.
-Better support for ultra-wide monitors.
-Fix star spacing on map screen
-Other bug fixes.

-Balance changes for Hard Difficulty level to make more difficult.
-Reward amounts balancing for all difficulty levels
-Stores now have credits which means you can't sell unlimited amounts of goods for an unlimited amount of credits.
-High score leader boards are now only reported and saved for Medium and Hard difficulty.
-Blockades will no longer show up on 2 planets in a row.
-Fix for alerts to crewman/ship deaths during hyperspace travel.

-fix bug causing low probability game is beatable in given time (increased available time by 100 days)
-fix blockade negotiated discount not being applied
-lower amount of items passengers can steal or win from crew in card games
-fix out of time text error message for some instances
-add medkits have small chance to heal sickness
-passengers much less likely to be infected by crew illness. (Still plan to integrate some more modifications to infections spreading to be more fair).
-New main menu graphics

-FPS health kit heals less
-FPS health kit shows actual amount healed
-Allow high scores for failed run. Includes note and marking of failed run.
-Fix bug with Artifact collector not giving upgrade for 2 artifacts
-Kidnapped crew receives less damage
-New feature. Intel can be purchased from alien communications. This will revel store prices at future planets. The intel can be then viewed from the nav planet info screen.
-New Event. Space debris collecting. You are hired to collect floating debris in space. There is a time limit on claims and so you need to do it quickly to get your reward.
-New Event. Planet 21 cloud diving.
-New Event. Rescue disabled ship caught in planets gravity.
-Greater variance for artifact prices so the new Intel method can be more taken advantage of.
-Re-balancing of some rewards for various events
-Sickness can NO longer be healed by medkits. You must see a planetary doctor.
-Fix trading not showing from space bars. Will not show every time.
-Increased amount of passenger that can be picked up.
-Crew members will now DIE if they die in FPS mode instead of retreating to the ship.
-Allow options menu from main game menu
-Less random damage to crew in hyperspace.
-Show stat changes at warp in small increments
-Lower general FPS pickup amounts

-fix shield graphic not turning off if you end a level right when you get hit and the shield turns on.

-Extra buttons added to bridge to show names over characters along with limited stats.

-Space bars added. Certain planets now have bars you can visit for full stamina regeneration. Bars are accessed through the crew rest screen. The navigation screen will reveal planets that have bars.

-FPS health pickup number fixed. Now will account for crew mods. However, I realized it is still showing the max possible amount that health pack will heal instead of the amount it actually healed. Will fix in next update!

-balance crew health lost from hyperspace radiation while in hyperspace.

-9 NEW EVENTS! I won’t go into detail on each as I’ll let the player discover them but here is a list…some are elaborate while some are small. Some show up randomly while others are specific to certain planets. Here they are:
kleltak match event, parts delivery event, FPS crew abduction event, Artifact collector event, void space event, planetary tours event, galactic games event, worm hole study event, phased ship event

-Potential fix for FPS robots reverting to the wrong animation after being destroyed.

-12 new bridge character sprites! This means I had to change the character system and so your sprites chosen for previous saves will be reset to defaults.

-Soup vendor on planet 15. Please note this is missing artwork and will have that in the next patch or patch after depending on when I get the art in.

-Fix crew members getting sick if already sick from passengers.

-Fix to force stats to come back on after events during hyperspace travel.

-Remove decimals on some stats. Still a lot have decimals but will slowly remove some as time allows.

-FPS fix for possibility of red key card being behind locked door.

-When selecting crew for ground mission, now auto select the "next" button for joystick/keyboard control.

-Fix store title alignment on some resolutions forcing the word Max to move down to next line.

-Missile lock will now work on farther out objects.

-Fuel extraction added to supplies. Will allow you to extract fuel from the local star. This is fairly dangerous. Having an engineer will help. Takes 2 days. Uses standard oxy/food. Decreases stamina more due to stress.

-Added come back mechanic. If low enough on supplies will get a communication from a hyperspace barrier surfer. It's extremely dangerous but will give you a lot of supplies. (NOTE This is work in progress. For now includes space fight at end but would like to include an FPS fight as well).

-Added one additional crew member. This crew member doesn't have any special abilities.

Please note that most planets with arrival scenes will be getting unique events.

Stay tuned for an update on what new content is coming.

-Add clarification text for ship radiation damage that is atomically taken during hyperspace. This damage is more when pace and coolant ratio are set to higher levels.

-if ram into other ships will now cause damage

-Supply ship is balanced so that you cannot sell to it to make large profits and the cost of items is lowered.

-Remove random insta-deaths. If health is high enough, will take extreme injury otherwise will go into a medical stasis chamber and can only be revived by a robot doctor at space stations for a cost.

-Passenger causes damage causing ship to gain health...possibly fixed by more frequent display updates. Before it was possible that it looked like health was gained but it was just the timing of the status update. I THINK.

-Fix for seeing same beacons over and over.

-Fix bug that caused stamina and health to increase during jobs, scanning, oxygen extraction, etc. Stamina and Health should now be more difficult to maintain.

-Fix for blockade not lifting.

-Fix for crew member injured during oxygen extraction not being injured

-Increase ship damage from CYOA bombs and other CYOA events.

-Disease should be more frequent and more dangerous now.

-(Added from version 036) Added 3 new CYOA event types during hyperspace travel. These will be shown at least 1 time a play through.

-(Added from version 036) Minor fix to try to solve very rare occurrence where key is hidden within another object in FPS levels.

Early Access Version 035
-Fix FPS Ai leading target..there was a bug that made the Ai only able to hit you while you were still.

-Tear in space will now only show up a certain amount of times throughout the game instead of purely random.

-FPS add variations on rewards or upgrades depending on what crewmember you chose. For example: science gets a personal shield, engineer finds parts, etc.

-New feature: Passengers. Can now be hired to carry passengers to planets. Random events with CYOA elements will have a chance at happening during travel while you have passengers aboard. These could be pirates looking to collect a bounty on your passenger, the passenger trying to take over the ship, the passenger helping with repairs, etc.

-Fix for Blockades not being cleared.

In order to download this game you must purchase it at or above the minimum price of $10 USD. Your purchase comes with a Steam key. You will get access to the following files: 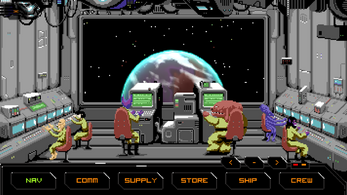 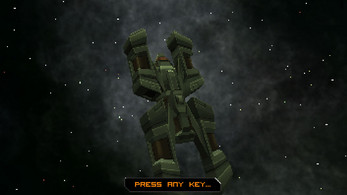 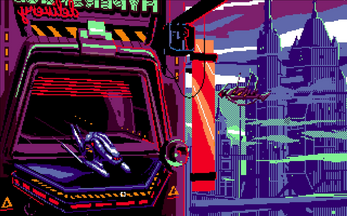 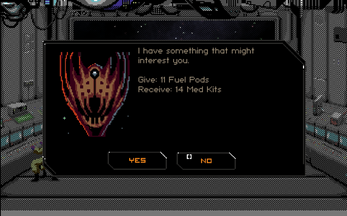 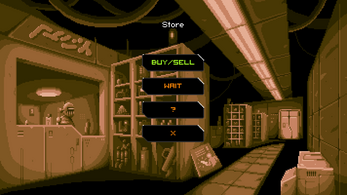 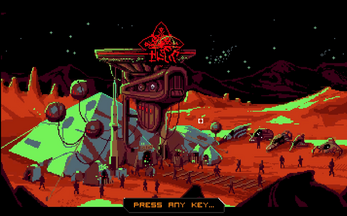 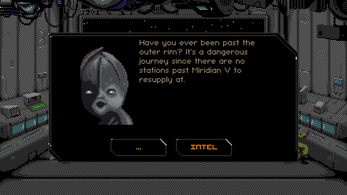 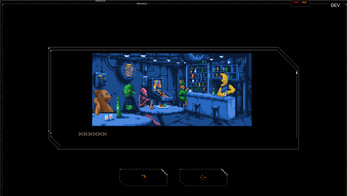 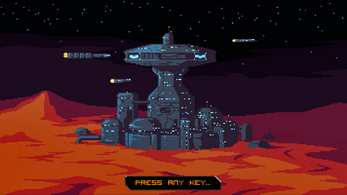 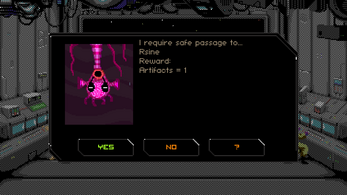 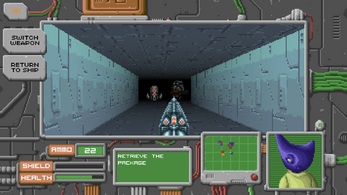 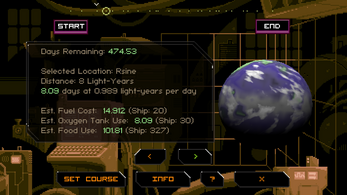 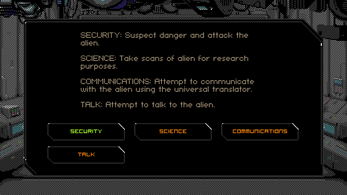 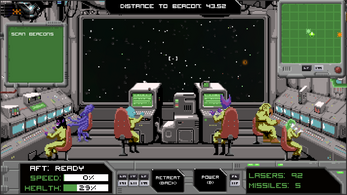 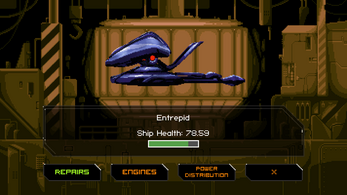 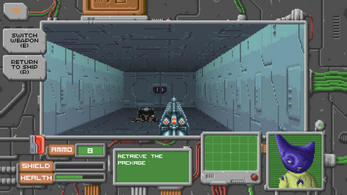 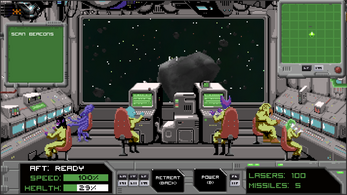